Haul N Ride would like to introduce you to a very attractive alternative to the standard accepted view of what makes up a motorcycle engine.

What you may not realise is that Radial Engines are not a new invention, and have a history of being used in both aeroplanes and motorcycles.

We are about to take a journey into radial engine motorcycle history from the early 1900s to bikes currently being built today.

What is a Radial Engine Motorcycle?

A Radial Engine Motorcycle is a motorcycle specially designed to be powered by an aviation aircraft engine. 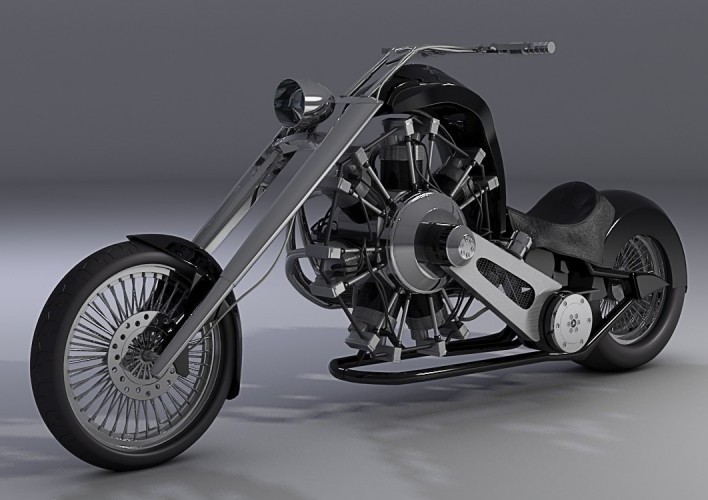 Radial Engines – How Do They Work

Radial Engines consist of multiple engines working together in an intricate dance of perfect timing, uniting their horsepower, to drive a propeller or drive train. Here is a demonstration provided by simple solenoids to help you understand visually.

Watch the Inner Workings of a Radial Engine Working

It is great to be able to look inside a Radial Engine operating.

We begin our trip back in time with Peugeot. Although Velocycles predate them, Peugeot Motorcycles are generally considered the oldest motorcycle manufacturer in the world, who built their first motorcycle in 1898. In 1930 Peugeot built the P50T oval board track racer that would typically have a single cylinder 100cc engine. 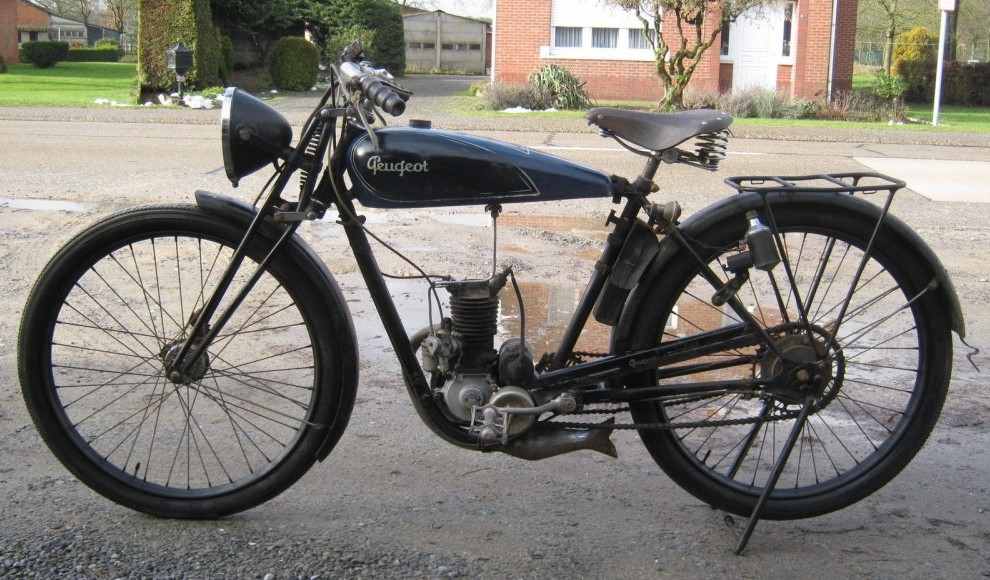 It appears some websites on the Internet, perhaps unknowingly, are giving the impression that Peugeot produced a P50t motorcycle with a Radial Engine.

However, after looking into it further it seems the Radial Engine was added later. Modified by Bo Hare, he used a modern scale version of WW1 Gnome & Rhone Overhead Valve 9 Cylinder Radial Aircraft Engine. Source: Here and Here and Here. 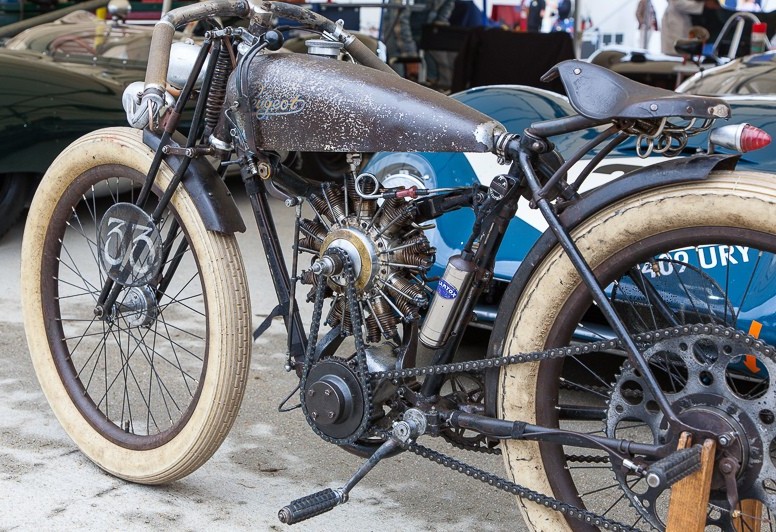 Considering Peugeot did not produce a Radial Engine Motorcycle, let’s take a trip back to 1921, where we will find the Megola. This motorcycle was actually manufactured with a Radial Engine.

“Look at that children, a motorcycle without a fuel tank or engine”. 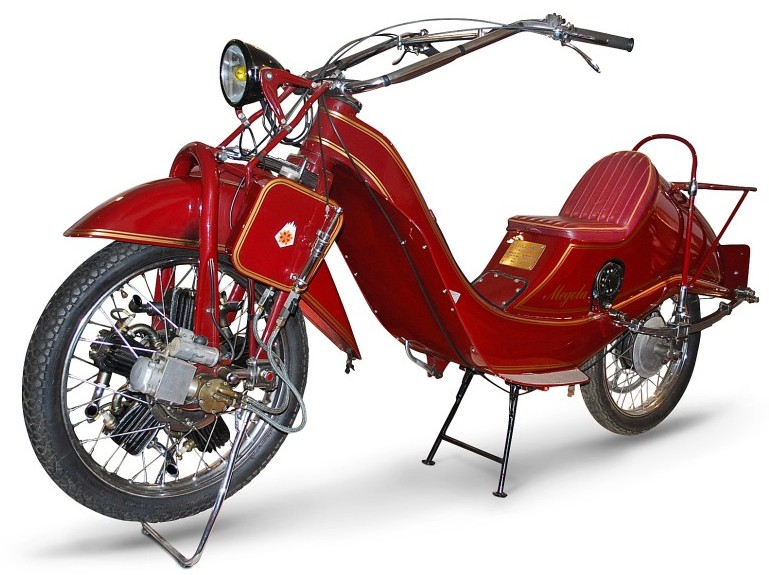 Well the Megola does have an engine, you just have to take a closer look at the front wheel. Designed by Fritz Cockerell in 1920, the Megola has a 5-cylinder 640 cc Radial Engine and exhaust completely housed inside the front wheel. This motorbike produces 14 hp and can reach speeds of 140 km/h (88 mph).

What looks like a great idea did have some disadvantages when compared to your modern ride. Firstly, to start the engine required elevating the front wheel off the ground and physically spinning the wheel.

The second disadvantage would be moving slowly through traffic. Without a clutch or gearbox, you would be unable to ride the friction zone to perform slow speed maneuvers. The Radial Engine had to be turned off to stop the bike.

Although it is believed that none of the original Verdel Radial Engine motorcycles exist today, there are a few working replicas.

The 1912 Verdel was powered by a 750cc Overhead Valve 5 Cylinder Radial Engine manufactured by Verdel, while the motorcycle was built by Packard, both companies located in the United Kingdom.

As this is a modern replica, and unlike the Megola, it does have a clutch and gearbox. Personally I would be concerned about the ground clearance below the lower engines. I guess that was not an issue as they were mainly used to race. 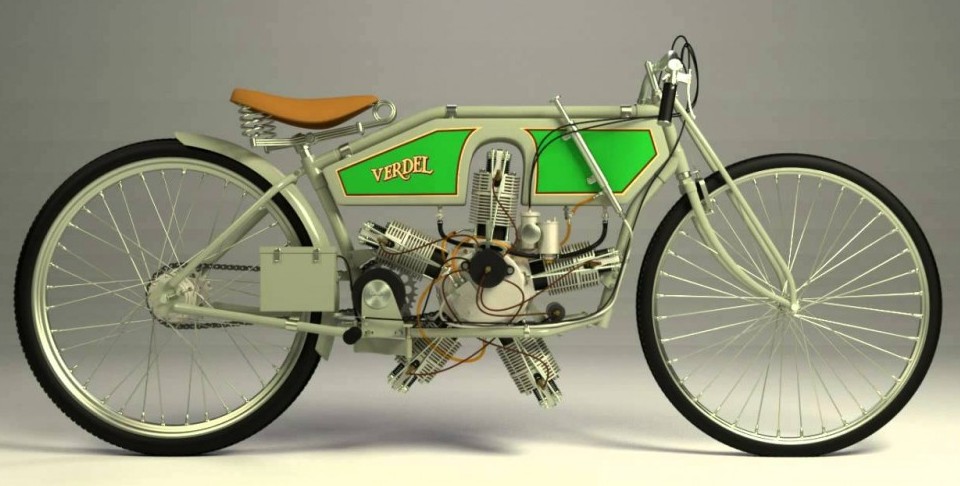 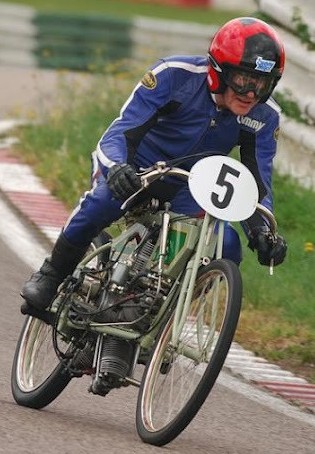 It is great that we have found two Radial Engine Motorcycles in history that were manufactured from 1912 to 1920. The story does not end there. Fifteen years later we find another creation in Munich Germany. 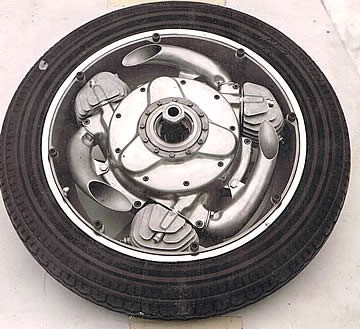 The 1935 Peace Dove (Flying Victory) Radial Engine Motorcycle was built by five German engineers, who were formerly working for Megola. The motorcycle weighs 135 kg and was powered by a 600cc, 3 Cylinder, 2 Stoke Radial Engine.

It was an improvement on the Megola as it had a two-speed gearbox and clutch. The engine intake is controlled by a rotary valve, which is a turning disk, with intake holes for exact timing of the fuel-air mixture intake.

Radial Engine Motorcycles seem to have disappeared from history until after the Second Millennium.

2005 – The Return of Radial Engine Motorcycles

Today they are being built in three basic designs, Crossway, Inline and Horizontal. 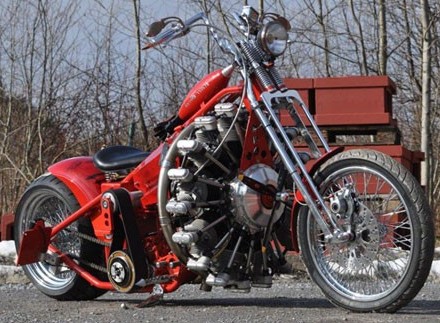 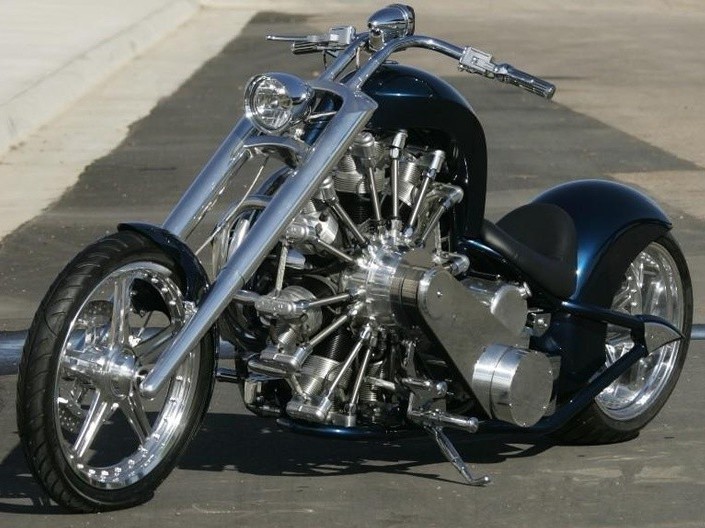 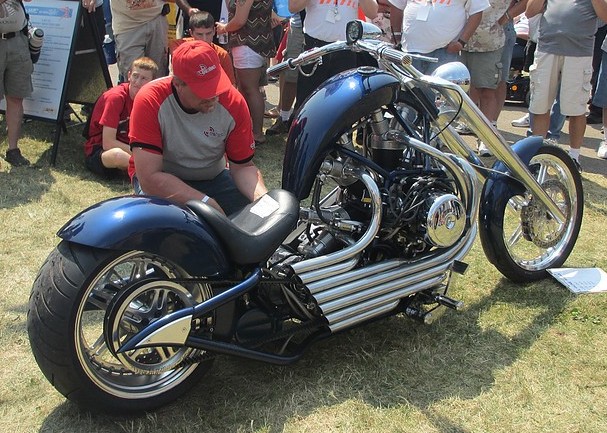 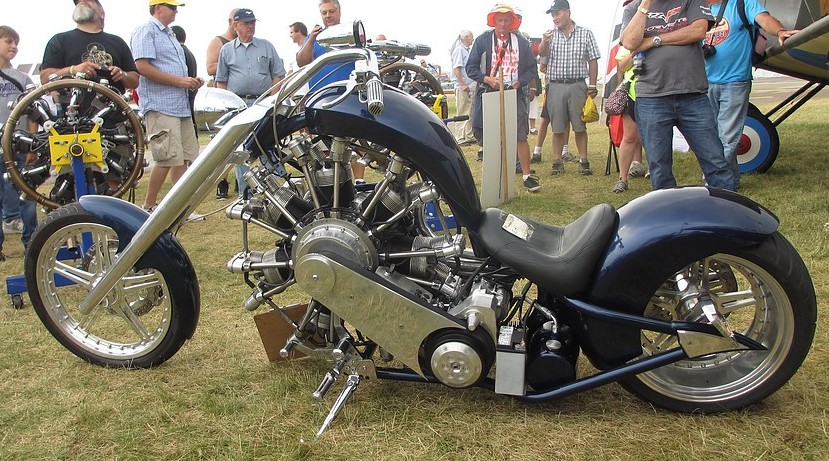 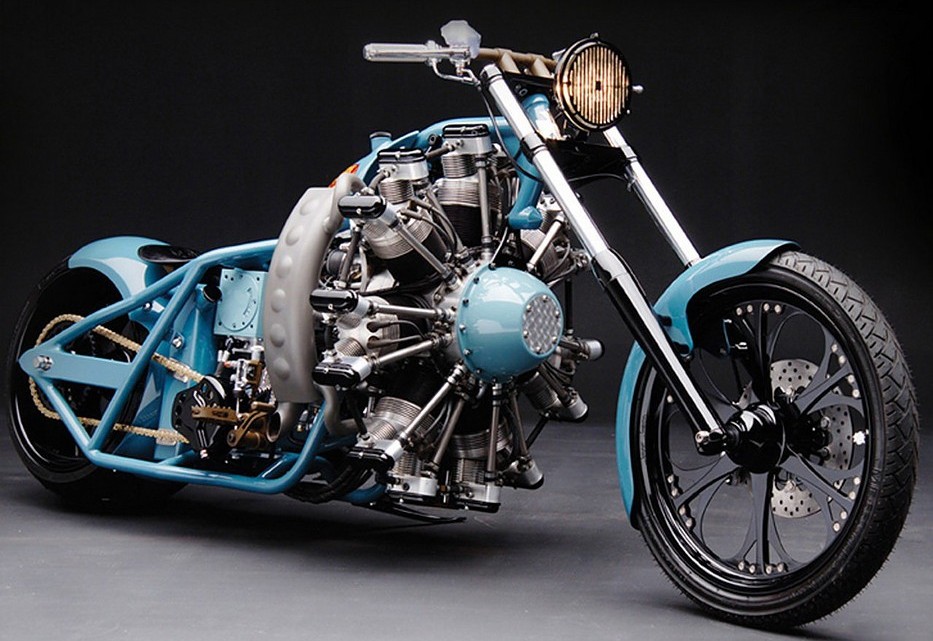 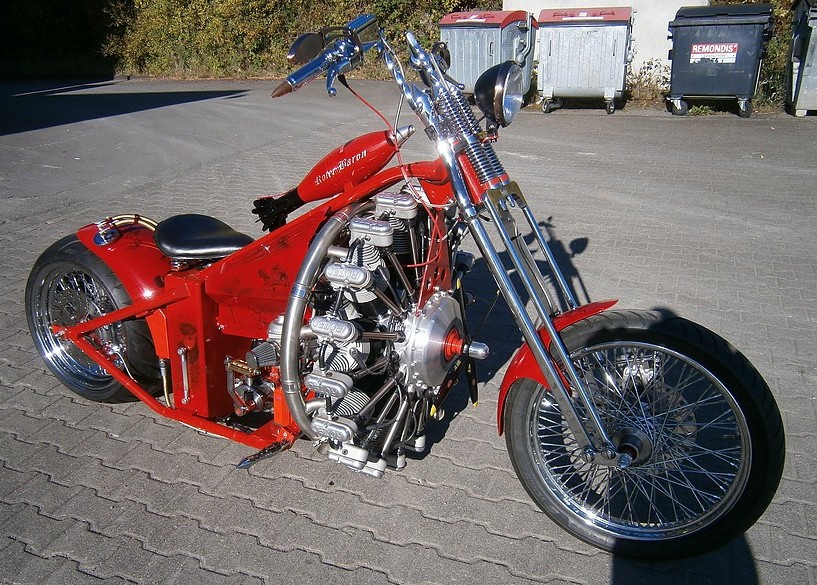 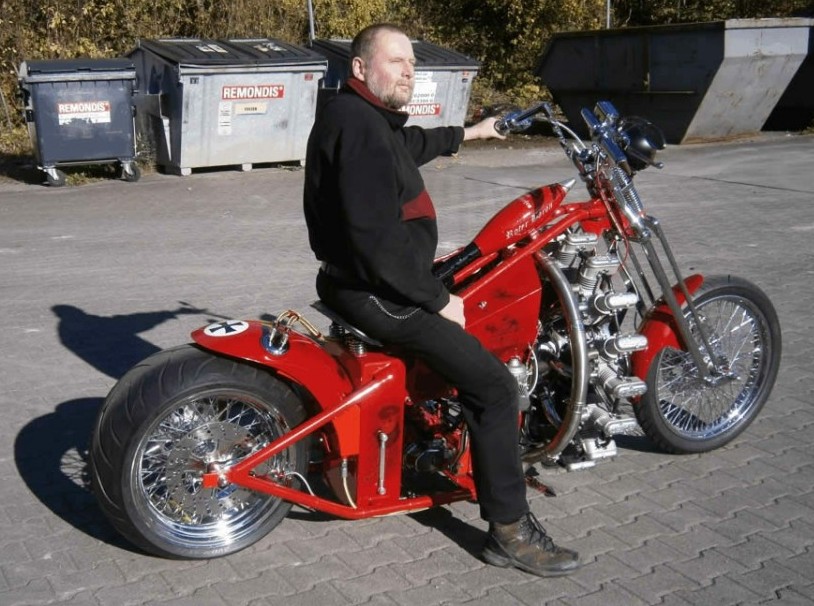 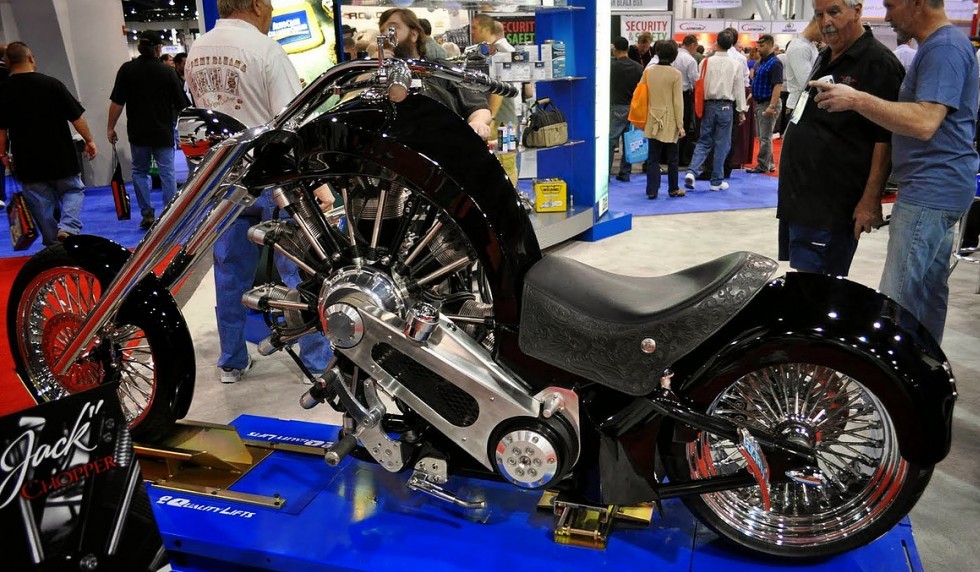 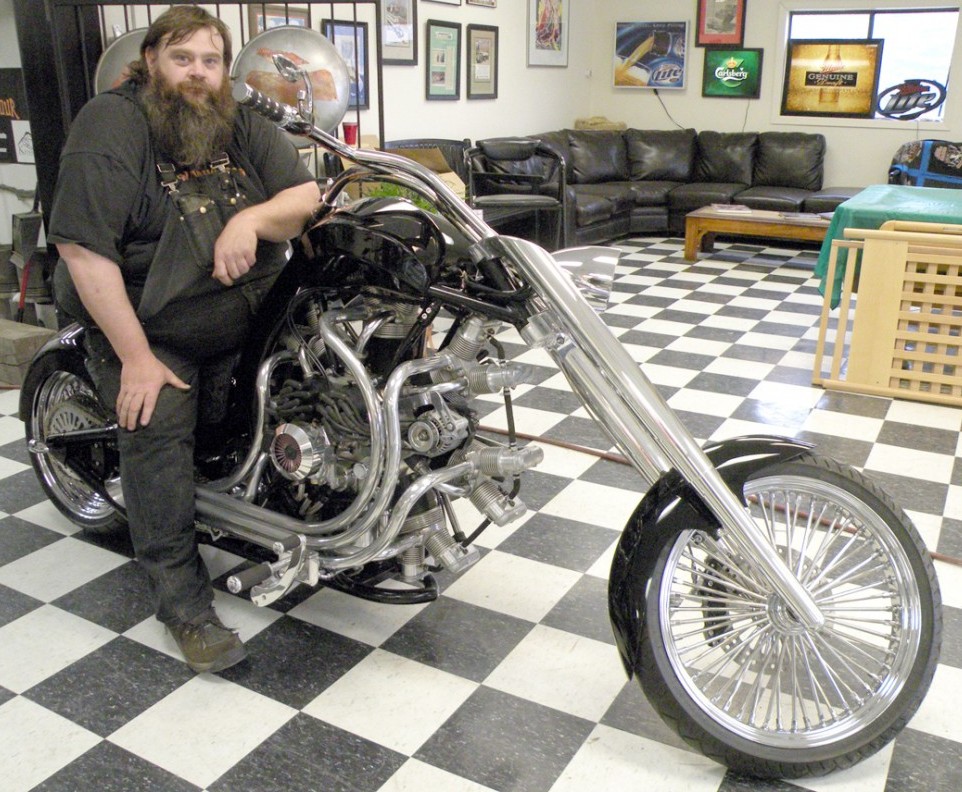 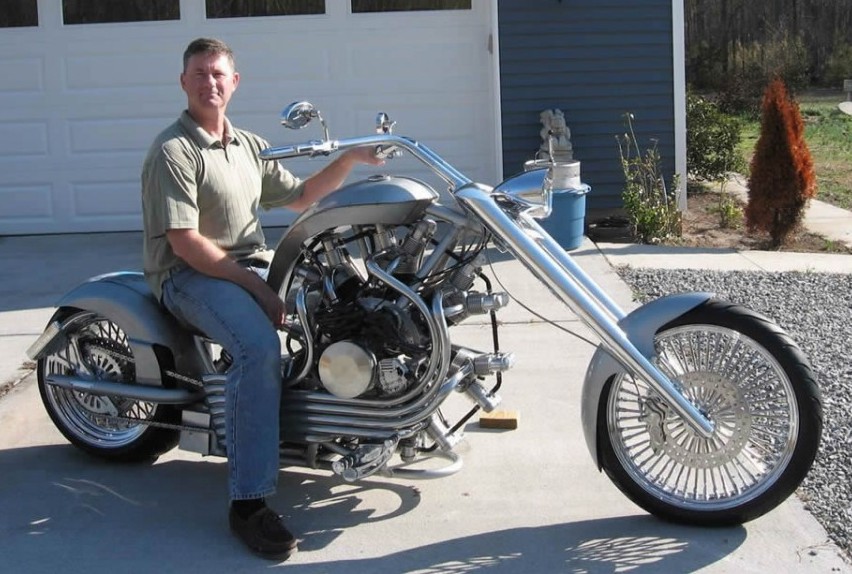 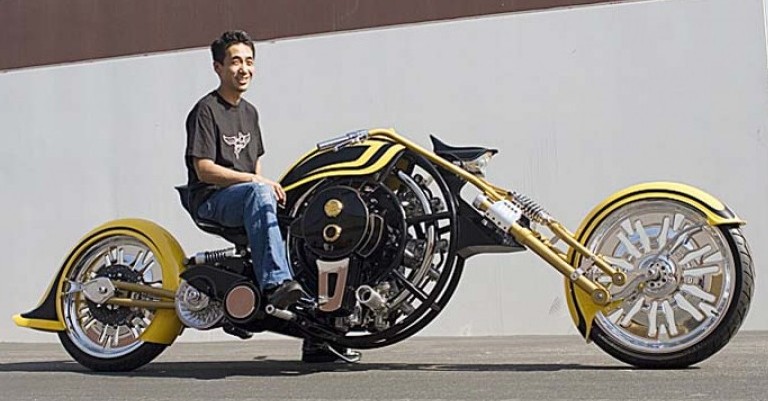 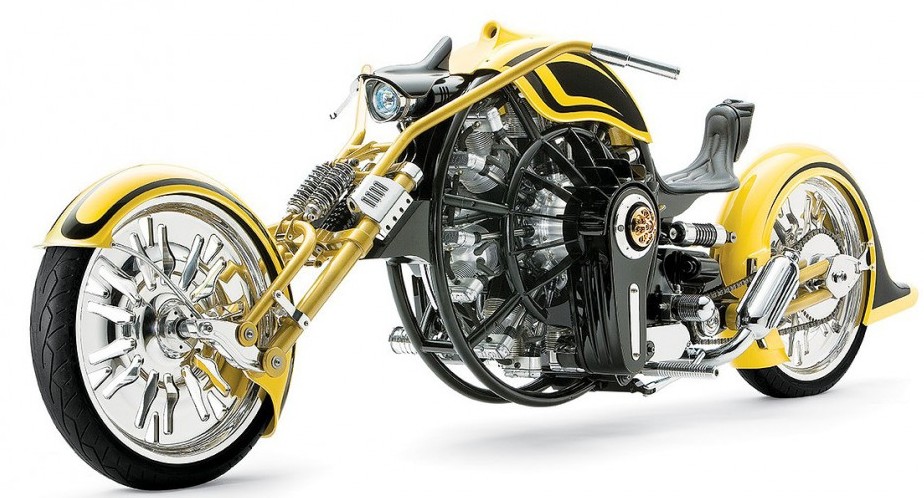 Purchase Radial Engines – Build Your Own

For your Moped or Scooter

Time to See a Radial Engine in Action

After that journey, I can’t help wondering what happened to Radial Engine Motorcycles between 1935 to 2005. Did it really take 70 years for the return? Or perhaps there are some other motorcycles hiding in the shadows, quietly unnoticed by the public.

I wonder how long it will take for a major Japanese or American company to begin mass-producing these beautiful motorcycles. Or maybe it will return to where it began in Germany and the UK.

Haul N Ride would like to congratulate the incredible engineers and inventors that have put so much work into resurrecting a vision and passion of the past, bringing it back into reality.

Can you Help Roland Identify a Radial Engine Motorcycle?

If your interest in reading this article is to create a Radial Engine Motorcycle, then I not only wish you success in your project, I also invite you to share your story with Haul N Ride. We would love to hear from you.

You may email any photos and details that I can share your project.

To see another radical redesign of motorcycles, visit The Dark Side – The Love of Car Tires on Motorcycles

The Dark Side – The Love of Car Tires on Motorcycles

9 thoughts on “Radial Engine Motorcycles – Past to Present”

You will even Discover Flying Motorcycles on Haul N Ride!