Haul N Ride is constantly on the lookout for innovative ideas and new inventions in the world of motorcycles.

It is not often you see a complete remake of the accepted design of motorcycles that could change the way they are manufactured in the future.

People are constantly re-inventing the motorcycle…

Considering such major changes have replaced telescopic forks providing safer performance, Do you think the motorcycle industry will welcome these changes with open arms?

The standard front telescopic fork system has been challenged since the 1970s.

Bimota is a small Italian manufacturer of custom and production motorcycles, founded in 1973 in Rimini, Italy.

Bimota have been producing motorcycles with Hub Center Front Suspension removing the need for telescopic forks. Here is a video that demonstrates how this technology works.

The center of the front wheel hub turns via steering rods

The following video demonstrates how it works

Bimota in Action – “Excuse me mate, are your forks invisible?”

The main disadvantage of the Steering Center Hub would be a situation, if during a ride, a rock became wedged into the hub causing the steering to be lost. Although perhaps not likely, it is a potential possibility.

Norman Hugh Hossack a Scottish inventor/engineer is the inventor of the Hossack Motorcycle Front Suspension System developed in the mid 70’s, as seen on the K Series BMW motorcycles.

The Hossack front suspension system consists of 2 wish-bones, an up-right and steering linkage. Similar components are found on the front of all racing cars, the only significant difference being in the up-right which has its geometry rearranged.

Leading Link – Suspension with a Purpose

You may have noticed there is another suspension system, that replaces telescopic forks and has been used for a long time.

If you are like me, and have attached a sidecar to a motorcycle, you will have heard of Leading Link. Leading Link is used on both sidecars and motor-trikes as they no longer lean.

When I attached a 140 kg wheelchair accessible sidecar to my FJ1200, I had to consider handling and steering. The sidecar combination would have to carry 120 kg wheelchair and its 55 kg occupant. This is a lot of weight.

The telescopic forks were removed and a leading link front end installed. 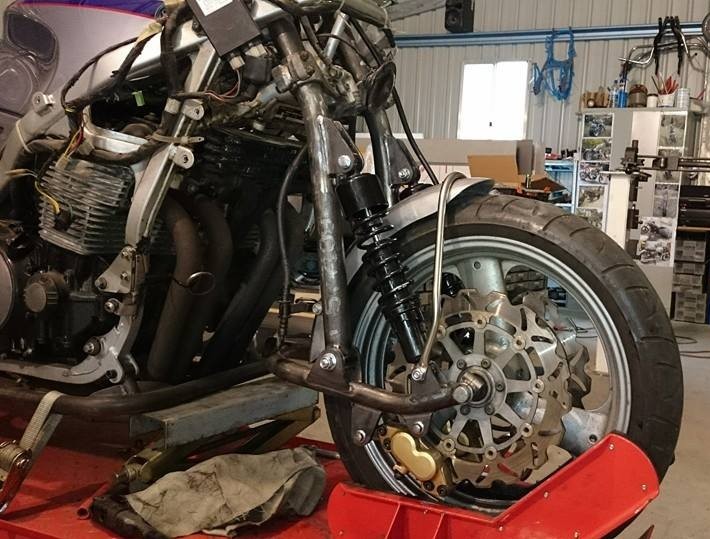 As you can see on my FJ1200, Leading Link moves the axis of the forks slightly rear of the hub of the front wheel of the motorcycle, reducing the Trail.

This modification is necessary for both sidecars and trikes and involves altering the steering Rake and Trail. 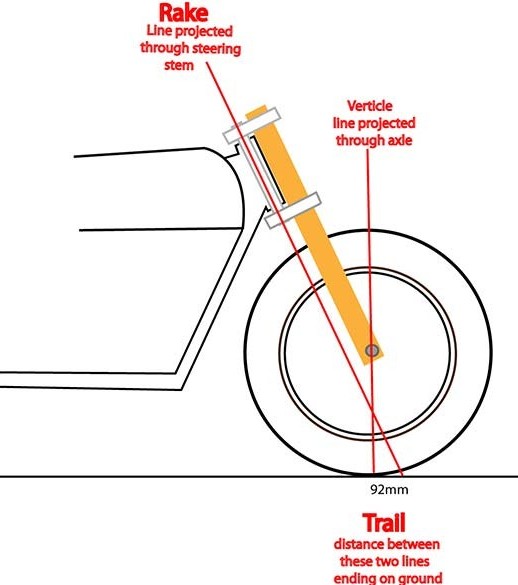 Rake: the angle the fork makes with a vertical line through the axle.

Trail: the distance between the extended steering head center line and the contact point of the tire.

While riding a solo motorcycle, you can effortlessly steer by applying slight pressure on the handlebar to counter steer. This is possible because the motorbike can lean.

If you are riding a sidecar or trike, you require considerable more effort when cornering to apply enough pressure on the handlebars, because the motorbike is not leaning. The faster you travel, the harder it gets.

We are truly living in exciting times. Australia have improved on the Bimota and Hossack designs, with changes that could revolutionize motorcycle suspension.

Introducing the Motoinno TS3 triangulated steering and suspension system. Motoinno is an abbreviation for Motorcycle Innovation. 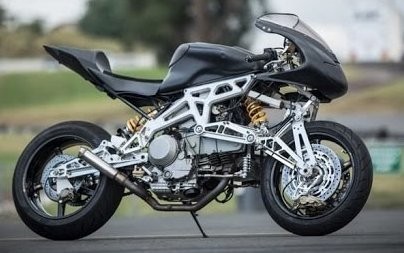 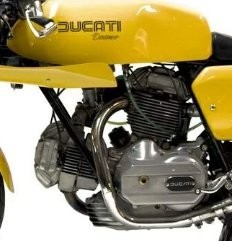 The prototype Motoinno TS3 is powered by a Ducati 900 SS air cooled 4 stroke L-twin engine. You can see by the image, the reason it is called an L-Twin.

The first question to ask, is why change? What is wrong with telescopic forks, they have been serving us for such a long time?

The answer involves a breakthrough that improves the safety of cornering with the revolutionary steering and suspension system. Telescopic forks have been a major contributor to uncontrolled front end crashes. 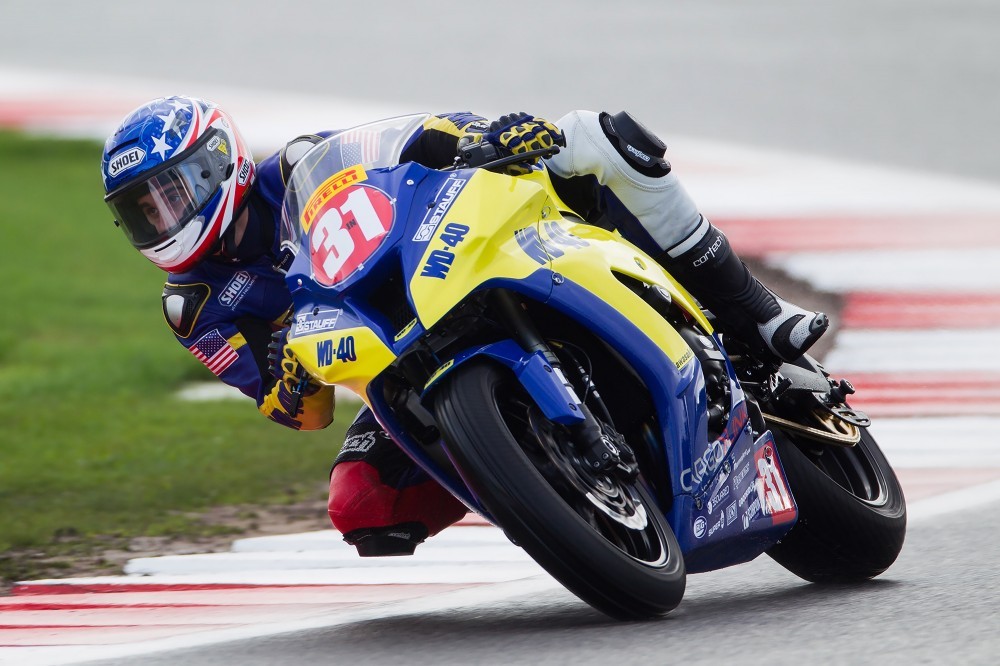 “The kits only take a few hours to fit and have been designed for users with minimum technical knowledge. Given the interchangeability of our kits and ease of installation, there is a high growth opportunity for our business if we can break into these markets.” Motoinno

The disadvantage of previous front end steering and suspension systems has been the influence of unbalanced destructive oscillation harmonics.

Another way to describe Directional Oscillation Harmonics, is to share with you my experience which landed me in hospital for 6 weeks with a broken collarbone and shattered shoulder blade.

Speed wobble is basically a situation whereby my front wheel was shaking its head from side to side in an increasing frequency. This led to me being thrown over the handlebars and the bike kissing my shoulder and it didn’t feel like a friendly kiss.

The more technical definition is as follows: a series of oscillations in which each oscillation has a frequency that is an integral multiple of the same basic frequency.

Apparently if I had been in this situation on the TS3, I would have finished the race, instead of my competitor having to provide assistance.

The TS3 removes high stress loads on hub-center king-pin and inherent destructive oscillation harmonics that normally unsettles the front of the motorcycle, which is a major cause of motorcycle accidents.

Motoinno TS3 Improved Steering and Braking on Corners – How it Works

Now let’s look at the TS3 and investigate the proposed improvements on the previous designs. 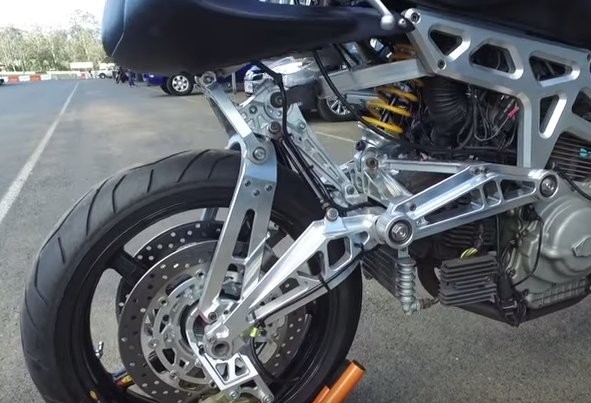 The TS3 provides adjustable rake and trail from 15 to 24 degrees. These are known ranges of stability factors for a hub-center system.

This is like power steering on a motorcycle combined with the best features of telescopic forks and leading link, rolled into one.

Isolation of Steering from Suspension and Braking

The Motoinno TS3 has demonstrated the following benefits to steering and braking:

The TS3 allows trail braking through any corner/camber combination. Trail Braking involves applying your brakes as you approach a bend to control entry speed, but as your motorcycle begins to turn into the bend, you gradually release the brake pressure on the brake lever as the lean angle increases.

Due to the design of the TS3, experienced riders of the racetrack have reported such a difference that they will have to re-learn what they consider fact in trail braking.

Remember that trail braking if performed correctly can assist a rider to avoid a hazard while on a bend.

When we slow down on a motorcycle, the front forks compress. Likewise, when we accelerate, the forks expand. The TS3 suspension does not collapse (bottom out) under heavy or emergency stop braking. Fully adjustable pro-dive and anti-dive combination capabilities between: 100% (full front end dive) / 0% (neutral front end dive geometry) / 100% (front end rise under braking). Best practice combination outcomes have already been recognized, tested and implemented within the prototype.

Here are some other benefits provided by this revolutionary design triangulated front end stability system. 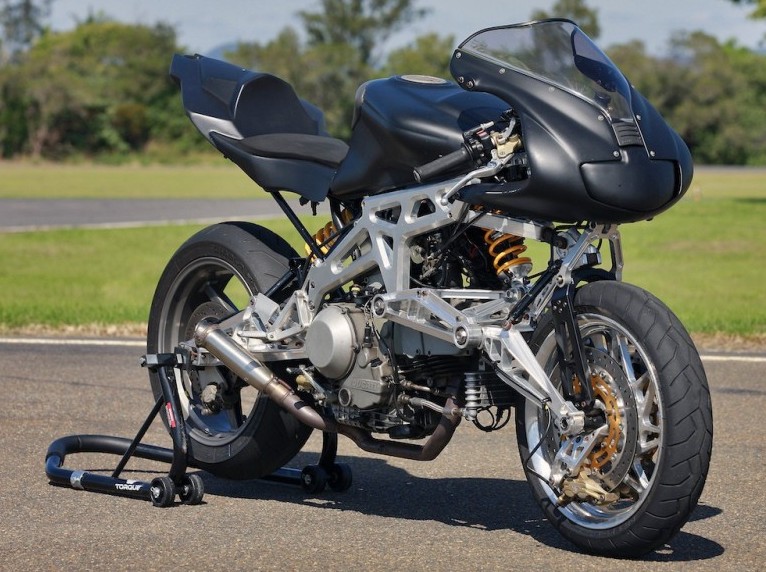 The Australian Queensland government have provided a grant to Queensland Motorcycle Innovation of $250,000 funding to commercialize its ‘Motoinno TS3’ technology, to set new safety standards in handling, braking and power-to-weight ratios for motorcycles.

This funding has the potential to accelerate Queensland into a global player in the motorcycle industry, as well as improve the safety of riders in Australia and around the world. Source: Click Here

I tip my hat to Ray Van Steenwyk for creating Centre Hub Steering that works so naturally, providing a safer motorcycle for all riders.

His two years working with CAD design, combined with his two years development on components and $350,000 AUD spent (including patents) has produced a ride that is rock solid on corner handling. To Visit Motoinno Click Here

You will even Discover Flying Motorcycles on Haul N Ride!